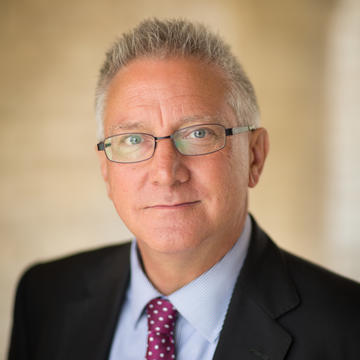 John holds a BSc in Electrical and Electronic Engineering from Bath University. He worked for many years in telecommunications, most notably holding a number of senior management roles during 20 years at Vodafone. This included a 5-year secondment as Director of Business Operations based in San Francisco.

John moved into the charity sector in 2009 to work for St Aldates Church, Oxford (one of the largest churches in the Church of England) as Operations Director. He was appointed as Bursar of St Cross in September 2014.

John holds a Diploma in Biblical and Theological Studies from Wycliffe Hall.

John lives near to Wantage in South Oxfordshire, is married to Carin and they have three grown-up daughters (one of whom studied at St Hugh’s).  He is a keen cyclist and is the Chairman of Cycling UK Wantage (a local branch of the UK's national cyclists' organisation) covering Wantage and the surrounding towns and villages. His other hobby is music - he sings and plays guitar and bass guitar badly but enthusiastically.